“The hardest thing in the world is to simplify your life.  It’s so easy to make it complex.”  -Yvon Chouinard, from the film 180 degrees South by Chris Malloy.

I was sitting with a good friend of mine this week, Gerry Moffatt whose winter has consisted of nursing a severely broken leg back to health. In a dark instant this December his life got really, really simple. Since then he has had only one thing to focus on- healing. It was the not the winter he anticipated, nor I’m sure would he want to go through it again, but the simplicity of his task is something many people would envy if not for the horrendous pain. My life this year has been in some ways quite similar and while comparing the two is preposterous that’s what we found ourselves doing over a mountain of eggs and coffee. Inevitably at these regular breakfast chats that me and Gerry cherish we talk in length about how my Red Bull X-Alps training is going. He asked me a question this time that I thought had an obvious answer. “Would you do it again?”

Some “hard” training goes down in Northern BC

I answered immediately: “Fuck No!” Training for what is billed as the hardest adventure race on Earth has consumed my every move and thought for the last 7 months, and I’m sure will only get exponentially worse until the race starts July 5th. And I mean CONSUMED. I eat; I train; I eat and eat and eat; train and train and train; make lists that have no end; and sleep whenever possible. My heart rate monitor has become clothing. Metrics are studied, diets are adapted, routes are analyzed. This is my life. Unless you have competed in this race, or are a rookie like me this year I promise you can’t possibly imagine what goes into this kind of campaign. On January 1st I cut out alcohol completely in order to sleep better and recover faster. I like beer, and I like scotch. Not an easy task, to give up the things you love, but when that gun goes off in Salzburg I don’t want any excuses.  When the race ends, if I do poorly I don’t want to look back and wonder “God, if I’d only done X…”  So I’m doing everything I can to prepare.

1 of 9 stations that I call “my hell workout”

To complete the race we will gain the altitude of Everest four times between Salzburg and Monaco. By foot, with our packs, which consist of our gliders, harness, helmet, emergency gear, clothing, water, food and instruments- about 12 kg on average over a course that is the hardest in the races’ history. Even if the weather is good and we fly a great distance of the route, we will cover an average of two marathons a day on foot- for two weeks. In the Alps, which are not known for their flat terrain! Every Monday my trainer, Ben Abruzzo, an ex-army animal who has competed in other similarly suffer-oriented adventure races like the Death Race and Tough Mudder posts my training week on Google Docs. My job is simple:  put my head down and do it. Each week is harder than the last.

But as soon as I said there was no way I’d do it again Gerry picked up on a look on my face that contradicted those very words. For all the pain and suffering that goes into training for something like the X-Alps there is a grander gift, and it blankets any of the misery easily. It is the gift of simplicity. You have one thing to do, and one thing only. The rest of life melts away. When I’m not physically training and it’s windy I’m out ground handling. When it’s flyable I’m in the air.  When it’s dark I sleep. The problems, the stress, the busy-ness that most of us hold off with only marginal success fades to background noise and is replaced with a clear and awesome goal:  Until the race, train your ass off. During the race, don’t die, and suffer better than the rest of the pack. 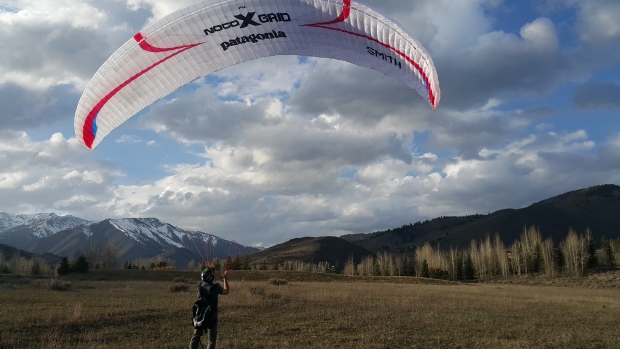 When I was young my whole life oriented around ski racing. Year after year nothing was more important than training hard to ski fast. Injuries to my knees ended that career and  this week I realized some 20+ years later sitting there talking to Gerry that something like the X-Alps is what I’ve been seeking ever since. A simple, clear goal. Like Yvon says in that quote, it’s not easy to do.

Not all training has to suck:)

Someone else recently asked me what about the race am I most anticipating. There have been days in the last few months when my lungs were burning so badly that I thought I would either puke or pass out. On those days the answer would have been to just get it over with, to be done with this madness.  But now even on the hard days I find myself smiling. What an amazing privilege- to have nothing else to focus on other than to get strong in order to compete in what is for me easily the most awesome, wild, dangerous and epic race that exists. I know there will be days during the race that will hurt so badly I’ll want it to end. And there will be epic moments in the air that only I will see and my heart will sing in a way that only paragliders understand. And there will come a day when it’s all over and all the striving and training and preparation and planning will be behind us I will no longer be a rookie and Gerry’s question will be a very interesting question to contemplate indeed.

“Taking a trip for six months to get in the rhythm of it. It feels like you can go on forever doing that. Climbing Everest is the ultimate and the opposite of that. Because you get these high powered plastic surgeons and CEO’s, they pay $80,000 and have sherpas put the ladders in place and 8000 feet of fixed ropes and you get to the camp and you don’t even have to lay out your sleeping bag. It’s already laid out with a chocolate mint on the top. The whole purpose of planning something like Everest is to effect some sort of spiritual and physical gain and if you compromise the process, you’re an asshole when you start out and you’re an asshole when you get back.”

Quick photo session before heading out for 6 hours of walking on pavement. Good times!

2 thoughts on “A life uncomplicated”